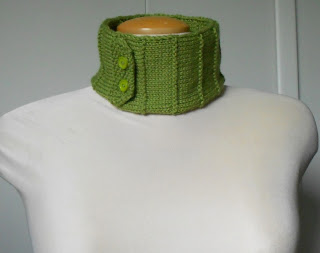 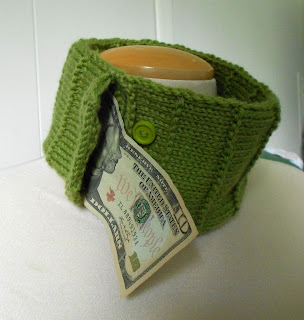 It's very common for a fitted cowl to have buttons. It lends character and structure to the knitwear. In this case, I thought I could do a little bit more. This button flap is completely functional and hides a pocket that could be used for emergency cash or hiding a love note until just the right moment.

Less Common Abbreviations
wyif/wyib - With yarn in front, with yarn in back
ssk- slip, slip, knit

Repeat this pattern 12 more times or until the cowl is the desired length. Keep in mind that it will be grafted so must be able to stretch over the head.

Graft the held stitches to the cast on row. Fold the entire cowl in half using the slipped center stitches as the crease. The first and last stitch of every row is to be used as a selvage for seaming. 2 panels away from both sides of the opening using the purl bumps as a guide, sew the front part of the cowl to the back part to create a pocket. The flap will then be in the center of 4 panels worth of pocket. This yarn is a 3 ply so I separated the plies and used just one to sew the buttons in place. You might alternately choose to use sewing thread.

This is so far the most complicated pattern I've tried to write out after having improvised the original. Please let me know in comments if I made any mistakes and I'll do my best to fix them!
Posted by Amanda (loves Kevin)