UPDATE! I am freaking out. I feel like I need to run around a show everyone constantly, but I'll try and be satisfied by telling the internet and hoping someone comes and shares in my joy. This very tulip bud is the same one from the last blog post.  I can't hardly believe it.  It was nothing but green before and now suddenly, BAM! Pink.  It's a lovely rosy pink like the kind Cover Girl advertises in their lipstick line.

I don't know what the rest of the bulbs will look like, but Kevin and I did find time this afternoon to plant a bunch of them in an oval in the front yard. We'd left a big pile of leaves from fall on the lawn to smother the grass in that area.  It's not all completely composted yet.  I figured it would take more than just one season anyway.  With proper weeding and mulching, I'm betting we can finish it off with some rocks or a mini fence border and have a nice little bed over the next couple years.

We also had a big bag of daffodil bulbs which we planted in a cluster by the neighbor's fence along with a few leftover tulips.  I hope very much that they have time to bloom this season!
Posted by Imaginary Friend Boy No comments: Links to this post

Email ThisBlogThis!Share to TwitterShare to FacebookShare to Pinterest
Labels: gardening

I think this is it.  I think this is the year I'm finally going to change my thumb from black to green.  Those that know Kevin and me, know that this is the beginning of the second year living in his Grandpa's house.  Grandpa has graciously given us free range of the yard since he never goes out there or uses it at all. Last year we got settled and dreamed about digging around in the back yard. We walked around the perimeter.  We tried to pay attention to where the light falls throughout the year.  We were even surprised with a bounty of volunteer hardneck garlic! (The scapes were delicious!)

This year, we've still got those big dreams, but now we sort of have a haphazard plan to get a modest harvest and our fingers crossed to start prettying up the place a bit.

I can't lie.  I've been collecting seed packets all year long.  They tempt me so readily.  Seeds are surprisingly cheap and at the end of the season the price plummets even more.  According to the various books I've been reading, they'll still be viable for a couple more years if I store them properly. 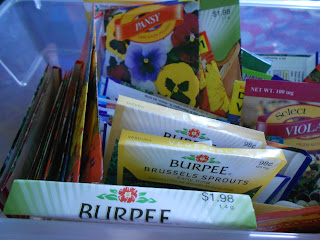 Ignore the prices in the corner.  Everything in this picture I got for 20 cents a pack or less at the end of last season.  Sure, some of the seeds will die, but when has anyone ever gotten every single seed from a packet to sprout?  On top of that, what home gardener could ever have use for as many plants that would grow from the hundreds of seeds that are in a single packet?  I for one don't anticipate needing 200 brussel sprout plants this season or even in my whole lifetime.

I know it's way to early to start planting veggies outside, but thanks to a lovely Christmas gift, I've got a windowsill full of herbs. 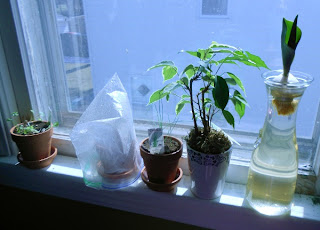 That's Cilantro on the left.  Dill is still seeds under the plastic bag, and little bit of chives in the center.

If you're wondering why my hopes are so high, let me just say this.  That little bonsai tree second from the right almost died while Kevin and I were away on our honeymoon.  I took a pair of scissors, cut off a bunch of dead bits, watered thoroughly, and miraculously it sprang back to life!  It just needed a little attention.

And speaking of our honeymoon, that bulb being forced on the far right was a wedding present from my Aunt and Uncle Liz and Terry.  I've never forced a bulb before and I had no idea how it was done.  I just saw a picture of a bulb at the top of a bottle in a magazine.  I found the milk bottle at a thrift store for a dollar, pulled the bulb from the crisper drawer of the fridge (I didn't have time to plant them last fall before the snow started falling), and set it at the top.  A few days later, the spike appeared!  I got so excited I might have gone a little overboard with my other seed starting. 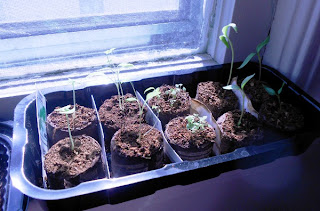 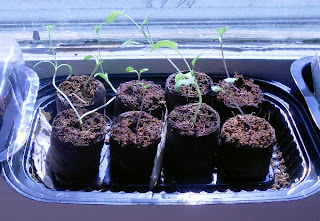 What can I say? Cabin fever washed over me at the sight of the herbs and tulip bulb! At the top left to right is basil, curly parsley, sweet marjoram, jalapenos, and sweet peppers.  At the bottom is cosmos flowers, kohlrabi, broccoli, and cauliflower.  I've read that those last three are cool weather crops which can stand a light freeze.  With a little protection in the form of some garden cloches, I'm feeling confident that I can get those little guys out in the dirt.  Of course I'll have to start hardening them off starting today.  I hope they make it.  They're probably my three favorite vegetables.

I've also got some beefsteak and cherry tomatoes in a big clear plastic tub in another room. They might survive if I pot them up.  (Note to self: Buy potting mix.)

Oh! And I also started a garden diary.  I've been keeping track of how long it takes for each seed to germinate, the temperatures everyday (and I might even end up making a year in temperatures scarf since I'll have the data), and wrote in important dates ahead of time including the predicted first and last frost dates of the year and about when I should be able to harvest that garlic I planted last year.

I don't anticipate being able to feed us off of the little backyard garden.  Our soil isn't so good yet, nor do I have the kind of experience for that, but I know I'll have a good time getting outdoors and enjoying nature this year. If I should pluck a tomato or cut a broccoli head, so much the better.

Posted by Amanda (loves Kevin) No comments: Links to this post