Kevin's Afternoon Report
-----------------------------------
There was one Disney movie that was a clear childhood favorite for me. I watched my VHS tape over and over, memorized the songs, and collected all of the fast food kids meal toys associated with it because I just loved it that much.That movie was "Toy Story."
But my favorite non-Pixar movie of around the same time was The Lion King. At the time, I found it to be funny, with an engaging story, and memorable music! But most importantly, it was a Disney feature that wasn't "for girls." That may also be why I was more drawn to Aladdin and this one but dropped out of Disney movies once Pocahontas and Hunchback got into the picture? Or maybe I was just growing out of them at the time. Anyshoe.
Before I get into the inevitable downsides, I love the look of The Lion King. I daresay that, in my opinion, it's the best-looking of the D52. Maybe I'm partial to the realism that doesn't get too realistic. The backgrounds. The painting. The cinematography. The subtle change in stylization to reflect the mood. The animation. The...the art! Beauty & the Beast was fantastically artistic to, but there was a few slightly off facial expressions here and there. And while I can't say The Lion King is absolutely perfect in its art - those computerized hyenas jar me - it strikes me as the highest possible quality that can be achieved through hand-drawn-and-painted animation. There's so much gorgeousness. And I know we'll see comparable beautiful imagery coming up in Fantasia 2000, but it somehow seems more meaningful as part of a story.
But as for the story itself? Well, of course we're not the first to point it out, but I can't not mention the very dodgy "lessons" being "taught" here. You see, kids, one day you'll be very successful, that is if you happen to be born into it. Just be sure not to visit that dark area of your city You know, that broken-down, scrummy-looking area? Anyone you meet there is a bad person and will try to hurt you. Especially if they, you know, talk kind of funny. And don't let the type of people who live there move to the part where we live, because if they do, well.... droughts and all that. But if something bad does happen to you, and you decide to spend your college years slacking off, it's...okay as long as you face your past later on?
This movie is obviously trying to teach a lesson, but doesn't actually do it very well. It's something to do with facing your demons instead of running away from, but it's so weird in this case because it's something that Simba didn't even need to run away from in the first place. So what they're saying is, if you've been convinced that you did something bad, then you should confess to having done it? I don't know. It's just so weird that I don't even feel like thinking about too heavily. And that means something coming from me!
Amanda will probably be better at talking about that element anyway, so let's move onto the music. Well, you know how kids are not very picky in their musical tastes, and easily gravitate towards things like mindless bubble gum pop? I confess, I listened to the songs of The Lion King all the time during the mid-1990s. And now...I'm not saying it's badly-written. As far as bubble gum, it's like...I don't know, what's the highest quality of bubble gum on the market? But compared to what I've been spoiled with from Ashman and Menken, it leaves clever rhymes and lyrical jokes to be desired. The bare-bones DVD we watched this week did not include "The Morning Report," but we had seen it before, and I don't think we were missing much this time around.

Favorite character: I'm gonna say Rafiki, partly to continue my monkey-as-a-favorite-character streak.
Least necessary character: Has the African Association of Hyenas with Mental Disabilities lodged any complaints about the use of Ed as a comedic element?
Overall: The Rule of Nostalgia hits hard as I realize The Lion isn't as funny, well-written, or musically strong as I remember it being when I was much younger. But I now appreciate what I didn't appreciate as much back then: How gosh-darn pretty it all is. 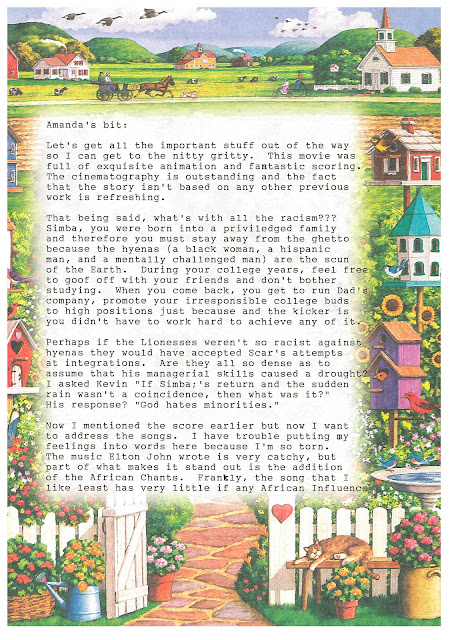 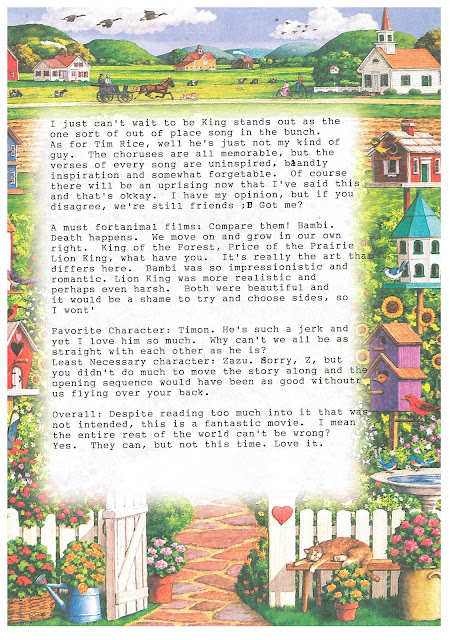