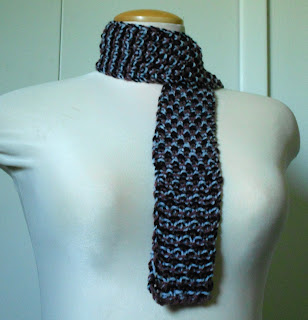 Using three yarns harmoniously is an excellent way for a beginner to learn color knitting. I'm not much of a color knitter myself, and even a long time knitter like me learned something new while working on this scarf.

Take three equal thickness yarns and use one to cast on. Take the second for the first row of knitting and take the third for the second row of knitting. For each following row, knit using the next yarn in the sequence. You won't get out of sequence because setting up like this gives you only one choice of yarn to switch to.

My recipe was three worsted yarns on size 15 needles. I cast on 11 and worked in moss stitch throughout. It gave an interesting effect. Looking at the fabric from the front looked like an even mix of color. From the side looked like bumpy stripes. Most interesting of all was looking from an angle down the length because it had an illusion effect! All of the purl bumps were visible and the knit stitches disappeared and made a three colored checkerboard. I was pleasantly surprised.