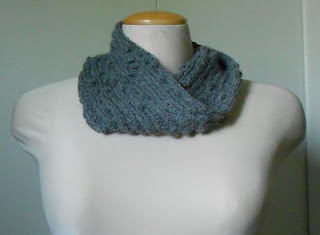 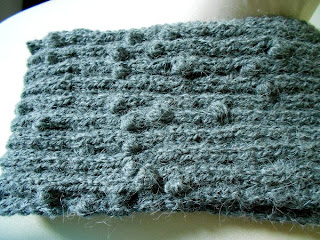 Basically, you set up a tv show or a radio show or a movie that has a lot of predictable behaviors. And you decide which of those behaviors are going to trigger a game knitting action. For this scarf, I picked out the Harry Potter movie series. My triggers were any time anyone said "Harry, Harry Potter, Mr. Potter" etc, every time the word "muggle" was said, and every time a wand was used to cast a spell. I cast on 40 stitches and worked in 2 by 2 ribbing at my normal pace. When one of these triggers happened on screen, I made a 7 stitch nupp into whatever the next knit stitch was. I ended up with a very knobby knotty cowl with quite a lot of character! Since I was watching Harry Potter, I was strongly reminded of the "wooly hats and scarves" that Hermione made during the fourth book.
Posted by Amanda (loves Kevin)