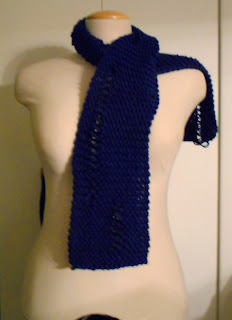 Would it be wrong to admit that I picked blue for this scarf just so I could give it the above title? Well if it's wrong, I don't want to be right.

I wanted to go a little punk, but it's so thick and fluffy, I'm not sure I pulled it off. It was still good practice on making drop stitches stop dropping where you want them to. I'm sure there are a bunch of ways to make it happen, but the way I do it is as follows.

So far, the drop always is exactly as long as I want it to be. I do notice that the fabric gets significantly wider when using such very large stitches as I've been using. I'll have to keep that in mind next time around.
Posted by Amanda (loves Kevin)